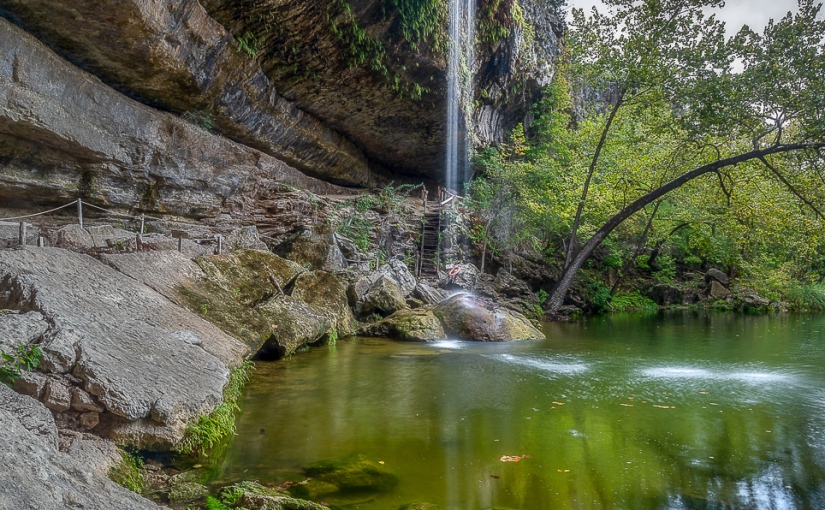 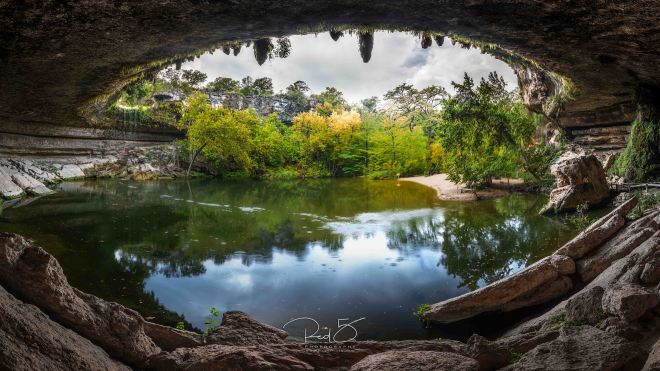 Hamilton Pool. If you’ve never heard of it, it is entirely possible that you have seen it online and said to yourself “I wanna go there”. Over the past several years there have been many travel blogs, articles, and images that have gone viral online showing the beauty of this hidden gem tucked away in the Texas Hill Country.

This isn’t one of those blogs though. Hamilton Pool Preserve is one of the most challenging places I have ever photographed and wanted to pass along why that is and what to expect if you plan a trip to this spectacular location.

First, a little bit about Hamilton Pool. Located in Dripping Springs, Texas just Southwest of Austin, the preserve’s pool and grotto were formed when the dome of an underground river collapsed over a thousand years ago. After a short hike down a rocky and steep path, you will find a creek accented with some of the most beautiful trees in the area. Following the creek upstream will bring you to the pool, and you will know when you’re getting close when you hear the relaxing sound of the 50-foot waterfall that feeds into the once hidden oasis. It is really a breathtaking spot to see.

So, let’s go over a few things you need to know if you’re planning a visit. One of the most important things you need to do is make a reservation… Yes, you heard right. Over the years, the number of people that visit the pool has become overwhelming for the park. To solve this, you are now required to make a reservation, which costs about $10.00. You will still need to pay the entrance fee at the park. The details can be found HERE on their webpage.

Just because you have a reservation doesn’t mean that there won’t be anyone else at the park while you are there. Personally, I like to go as soon as the park opens and during the week in hopes that I will get 30 minutes all alone before people start showing up.

Next, if you are hoping to take a dip in the beautiful water while you are there, check the site above first. Due to high bacteria in the water at times, the park will often restrict swimming.

Now, here are a few things you need to know and consider from a photography standpoint. The reason I mentioned that Hamilton Pool is so difficult to photograph has nothing to do with the reservations or getting there. It would seem that being such an Epic looking location, it would be hard to take a bad picture, but it is just the opposite.

The “grotto” of the pool is pretty much a cavern, which does let light in but is still very dark. Due to the park hours, the earliest you can get there and latest you can stay, the sun will be out, and even on cloudy days like in these images, there is a huge difference in the range between the shadows and the highlights. For those of you that don’t know, this is the Dynamic Range.

So, a normal person’s eye can see about 20 “stops” of light. Consider this to be like a volume slider, 1 being the darkness of the cave and 20 being the brightness of the sky. The image processing sensor on a high-end camera can only capture a range of about 15 stops of light though. So, roughly 25% of the scene you think you are getting is lost.

This means that what you are seeing with your naked eye when you look at the awe-inspiring dome of Hamilton Pool has a lot more detail and range than your camera can capture. So, there are a few options…you can pick between losing the detail in the shadows and properly exposing for the bright reflections of the sky in the water, you can keep the detail and texture of the huge fallen chunks of rock but blow out and lose all the detail in the sky… or, you can find another way of dealing with it and capturing both.

My choice for the location was to “bracket” the images and then merge them in Photoshop allowing both the beautiful highlights and the rich detailed shadows to show in the final image. Bracketing is when you take 2 or more images of the same scene but at different exposure levels. Normally I will shoot three, one properly exposed image, one underexposed, and one overexposed. This is also known as an HDR (High Dynamic Range) image on most mobile phones. 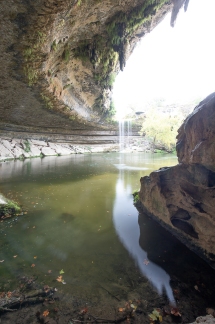 Once the images have been processed and merged together in Photoshop, you will get the HDR image that will hopefully have the full dynamic range of what your eyes saw.  Below is what I walked away with.

There are a few things to keep in mind when bracketing for an HRD image. Your camera may already have this feature that will automatically combine the images into one. I do have that option but prefer to take the images separately and merge them myself. This gives me more control over the final image. It is more work but I think the finished product is better.

You may have heard me say how important I think a tripod is when shooting landscape photography. Well, it is even more so in this situation. You will most likely be dealing with at least one longer exposure where camera shake can really become a problem but keep in mind that all three images have to line up if you want sharp focus in the final image.

In the end, Hamilton Pool is a very challenging place to photograph. On one trip I walked away with ZERO images that I liked. All that being said, and after all the work, I would highly recommend planning a trip. Even if you don’t take a camera, it is an incredible place that gives you the feeling of stepping through a portal straight into Middle Earth. Below is a “behind the scenes” video of my last trip.

Do you edit your images? I get that questions a lot and the answer is a very simple, yes.

Now I am not talking about changing out the sky or adding a dinosaur to the foreground. What I do in post-processing would be considered more as adjustments in my view. The reason is not to make the image look more impressive or different, but to make it look more like the scene and composition looked to me when I pressed the shutter release. That raises the question “why doesn’t the image look the way it did when you took it”?

There are a few reasons for this. First would be that I shoot everything in a RAW format. Raw files are named so because they are not yet processed and therefore are not ready to be printed or edited. These files capture and contain much more information and detail from the scene than you would get from a Jpeg image, which is great. The downside of shooting RAW is the images look somewhat drab and flat straight out of the camera.

Another reason is the dynamic range of the images I normally shoot is greater than can be processed straight to a JPeg image, it is just way too much information to be stored in that format. Bit, all that extra detail in the RAW files can be pulled out by processing the image. I use Adobe Lightroom for 85% post-processing, and by making a few simple adjustments to the image, the dark shadows are brightened to reveal detail that you couldn’t see, and the highlights are muted to allow the blown out areas of the image to be tamed and more impressive.

Once I have pulled images into Adobe Lightroom, the first few adjustments I make are pretty much the same for all my landscape shots and though they are very slight, they have a pretty big image on the overall look of the image.

I don’t have a standard amount for each adjustment, it is all done by eye to get the visual impact of the image to be as close to what the scene was when the image was taken. These are just the normal adjustments I make, and depending on the image I will make other changes as needed to the Whites and Blacks of the image, Exposure, and Sharpness.

Something I try not to adjust that often, and when I do, it is very slightly, is the color saturation of the image. Instead, I use the color Vibrancy adjustment. The difference between the two is that the vibrancy raises or lowers the primary color of the image, for this image it most affected the greens. Color Saturation, on the other hand, affects the level of every color in the image, and it is really easy to get carried away. 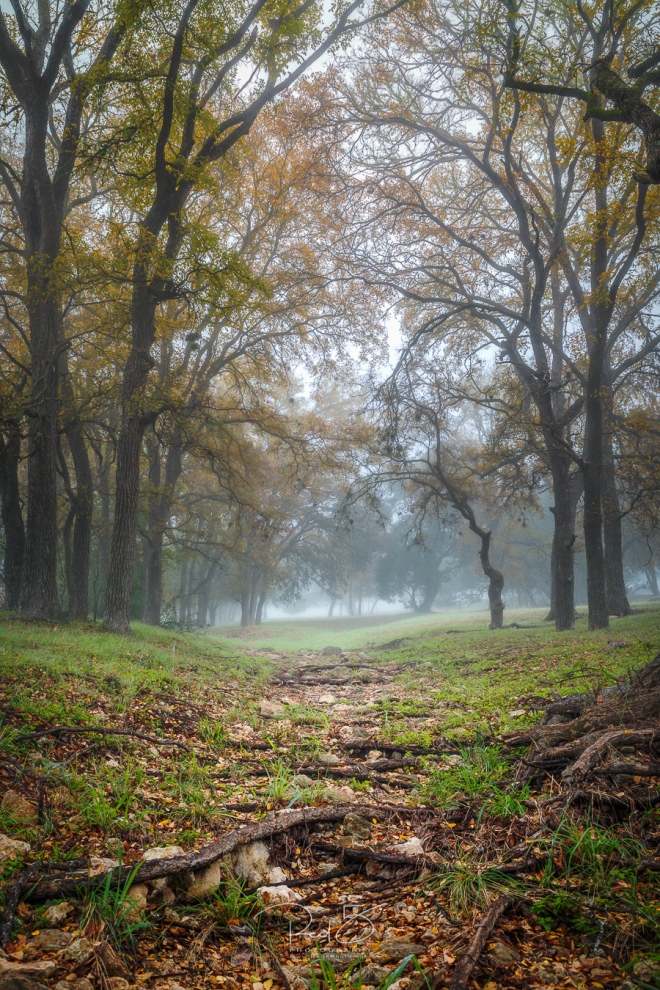 Adjusting the saturation of an image can really help and I don’t want to give the impression that I don’t ever use it, this image has a very slight saturation boost as a matter of fact. That being said, I think oversaturating images is something that a lot of photographers go to in an effort to elevate the impact of the image, and there are many that take it too far. So, I would suggest having a light hand when adjusting the saturation, but that is just my opinion.

Two other adjustments that I use but try to keep at a minimum are the Clarity slider and the Sharpness. Both can have a pretty dramatic effect on the image but can be taken too far pretty easily. Adjusting the Clarity can soften the image giving an ethereal look, or it can add a gritty harshness to the shot, which can lend well to some styles.

Sharpness is very important to most images, and having a slider seems like an easy way to raise the level of the detail. The downside of using the sharpness adjustment is that the more you add, the more grain or pixelation there is to the image, and this can really cause a messy look to the image if you are printing it. When I am adjusting the sharpness of the image, I will always use the Masking feature along with it. This allows the adjustment to be applied to specific areas of the image rather than the entire image in a blanketed fashion. So, rather than an entire blade of grass, just the edges.

In addition to making adjustments in Adobe Lightroom, I do also use Adobe Photoshop for other editings, like removing, people, trash, powerlines or just clutter from the image that I would rather not be there. Photoshop does an awesome job at this and it is a very easy step in my workflow when finishing the image.

So to answer the question again, absolutely I edit my images. It is an important part of the process of landscape photography and like I said earlier, the majority of the images you see on Instagram, Facebook, and other sites have been edited in some form or fashion. As a photographer in the digital world, post-processing technics are something that I spend a lot of time practicing and expanding on, the same way I do with new photo technics.